Jonathan Bowling grew up on a small farm in Kentucky, where the Appalachian Mountains melt into the rolling hills of the Bluegrass. His first sculptural efforts were the simple games of childhood--fieldstone castles, a bridle of hay twine, a driftwood armada. As a teenager in the late eighties, Bowling lived in Belgium, where he had access to the museums of Western Europe. On his return to the states he attended the University of Kentucky where he received his BFA in sculpture and a BA in art history. In 1996 he moved to Greenville, North Carolina, to pursue an MFA in sculpture at East Carolina University in 1999. He has been working out of his Greenville studio ever since. Bowling has showed extensively in the Eastern United States, which has resulted in a number of long term lease agreements and sales to municipalities and private collectors.

Over the past 10 years I have been working on a series of steel horses which focus on interior and negative space as much as on contours and surface. I envision each “horse” as a series of abstract sculptures which are combined to form the armature for the whole. These pieces are made with the intention of staying outdoors in a public area without the need for extensive maintenance. I have been using a forge to give the mane and tails organic curves, a contrast to the construction of the body. The materials I use are often from the turn of the last century, which I feel is appropriate for depicting an animal so intertwined with our agrarian past. Repurposed steel provides a sound structure which allows me to work on a scale that lends itself to public spaces. 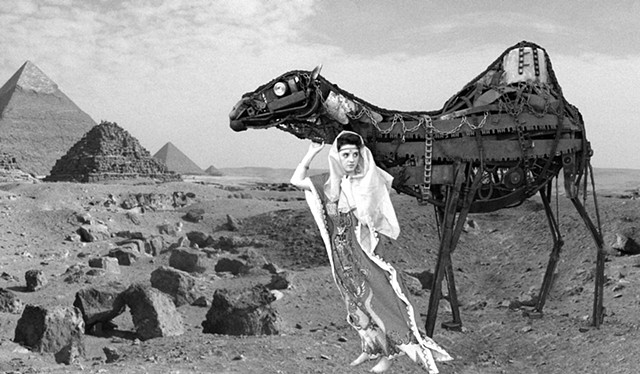